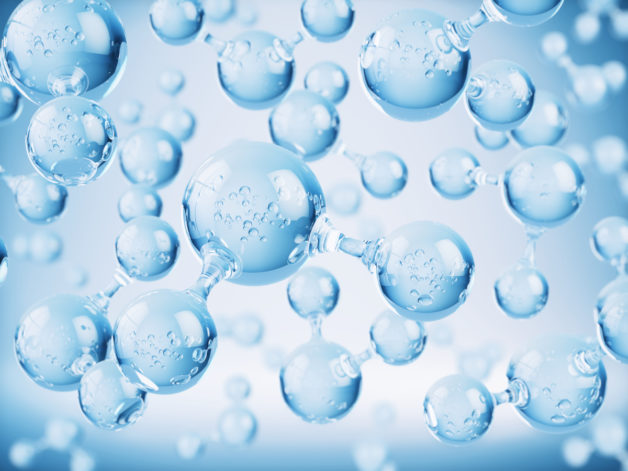 A promising solution relies on materials that capture heavy metal atoms, such as copper ions, from wastewater through a separation process called adsorption. However, commercially available copper-ion-capture products still lack the chemical specificity and load capacity to precisely separate heavy metals from water.

Now, a team of scientists led by the Department of Energy’s Lawrence Berkeley National Laboratory (Berkeley Lab) has designed a new crystalline material – called ZIOS (zinc imidazole salicylaldoxime) – that targets and traps copper ions from wastewater with unprecedented precision and speed. In a paper recently published in the journal Nature Communications, the scientists say that ZIOS offers the water industry and the research community the first blueprint for a water-remediation technology that scavenges specific heavy metal ions with a measure of control at the atomic level, which far surpasses the current state of the art.

“ZIOS has a high adsorption capacity and the fastest copper adsorption kinetics of any material known so far – all in one,” said senior author Jeff Urban, who directs the Inorganic Nanostructures Facility in Berkeley Lab’s Molecular Foundry.

This research embodies the Molecular Foundry’s signature work – the design, synthesis, and characterization of materials that are optimized at the nanoscale (billionths of a meter) for sophisticated new applications in medicine, catalysis, renewable energy, and more.

For example, Urban has focused much of his research on the design of superthin materials from both hard and soft matter for a variety of applications, from cost-effective water desalination to self-assembling 2D materials for renewable energy applications.

“And what we tried to mimic here are the sophisticated functions performed by nature,” such as when proteins that make up a bacterial cell select certain metals to regulate cellular metabolism, said lead author Ngoc Bui, a former postdoctoral researcher in Berkeley Lab’s Molecular Foundry who is now an assistant professor in chemical, biological, and materials engineering at the University of Oklahoma.

“ZIOS helps us to choose and remove only copper, a contaminant in water that has been linked to disease and organ failure, without removing desirable ions, such as nutrients or essential minerals,” she added.

Such specificity at the atomic level could also lead to more affordable water treatment techniques and aid the recovery of precious metals. “Today’s water treatment systems are ‘bulk separation technologies’ – they pull out all solutes, irrespective of their hazard or value,” said co-author Peter Fiske, director of the National Alliance for Water Innovation (NAWI) and the Water-Energy Resilience Institute (WERRI) at Berkeley Lab. “Highly selective, durable materials that can capture specific trace constituents without becoming loaded down with other solutes, or falling apart with time, will be critically important in lowering the cost and energy of water treatment. They may also enable us to ‘mine’ wastewater for valuable metals or other trace constituents.”

Urban, Bui, and co-authors report that ZIOS crystals are highly stable in water – up to 52 days. And unlike metal-organic frameworks, the new material performs well in acidic solutions with the same pH range of acid mine wastewater. In addition, ZIOS selectively captures copper ions 30–50 times faster than state-of-the-art copper adsorbents, the researchers say.

From left: Schematic diagram of a ZIOS network; and a SEM (scanning electron microscopy) image of a ZIOS-copper sample on a silicon wafer. (Credit: Berkeley Lab)

These results caught Bui by surprise. “At first I thought it was a mistake, because the ZIOS crystals have a very low surface area, and according to conventional wisdom, a material should have a high specific surface area, like other families of adsorbents, such as metal-organic frameworks, or porous aromatic frameworks, to have a high adsorption capacity and an extremely fast adsorption kinetic,” she said. “So I wondered, ‘Perhaps something more dynamic is going on inside the crystals.’”

To find out, she recruited the help of co-lead author Hyungmook Kang to perform molecular dynamics simulations at the Molecular Foundry. Kang is a graduate student researcher in the Urban Lab at Berkeley Lab’s Molecular Foundry and a Ph.D. student in the department of mechanical engineering at UC Berkeley.

Kang’s models revealed that ZIOS, when immersed in an aqueous environment, “works like a sponge, but in a more structured way,” said Bui. “Unlike a sponge that absorbs water and expands its structure in random directions, ZIOS expands in specific directions as it adsorbs water molecules.”

X-ray experiments at Berkeley Lab’s Advanced Light Source revealed that the material’s tiny pores or nanochannels – just 2-3 angstroms, the size of a water molecule – also expand when immersed in water. This expansion is triggered by a “hydrogen bonding network,” which is created as ZIOS interacts with the surrounding water molecules, Bui explained.

This expansion of the pores allows water molecules carrying copper ions to flow at a larger scale, during which a chemical reaction called “coordination bonding” between copper ions and ZIOS takes place.

Additional X-ray experiments showed that ZIOS is highly selective to copper ions at a pH below  3 – a significant finding, as the pH of acidic mine drainage is typically a pH of 4 or lower.

Furthermore, the researchers said that when water is removed from the material, its crystal lattice structure contracts to its original size within less than 1 nanosecond (billionth of a second).

Co-author Robert Kostecki attributed the team’s success to their interdisciplinary approach. “The selective extraction of elements and minerals from natural and produced waters is a complex science and technology problem,“ he said. “For this study, we leveraged Berkeley Lab’s unique capabilities across nanoscience, environmental sciences, and energy technologies to transform a basic materials sciences discovery into a technology that has great potential for real-world impact.” Kostecki is the director of the Energy Storage and Distributed Resources Division in Berkeley Lab’s Energy Technologies Area, and Materials and Manufacturing R&D topic area lead in NAWI.

The researchers next plan to explore new design principles for the selective removal of other pollutants.

“In water science and the water industry, numerous families of materials have been designed for decontaminating wastewater, but few are designed for heavy metal removal from acidic mine drainage. We hope that ZIOS can help to change that,” said Urban.

Researchers from Berkeley Lab; UC Berkeley; the University of Oklahoma; and the National Synchrotron Radiation Research Center, Taiwan, participated in the study.

NAWI was recently selected to lead a Department of Energy water desalination hub to provide secure and affordable water. The five-year $100 million investment represents the largest federal investment in water research in half a century.

Founded in 1931 on the belief that the biggest scientific challenges are best addressed by teams, Lawrence Berkeley National Laboratory and its scientists have been recognized with 14 Nobel Prizes. Today, Berkeley Lab researchers develop sustainable energy and environmental solutions, create useful new materials, advance the frontiers of computing, and probe the mysteries of life, matter, and the universe. Scientists from around the world rely on the Lab’s facilities for their own discovery science. Berkeley Lab is a multiprogram national laboratory, managed by the University of California for the U.S. Department of Energy’s Office of Science.

DOE’s Office of Science is the single largest supporter of basic research in the physical sciences in the United States, and is working to address some of the most pressing challenges of our time. For more information, please visit energy.gov/science.