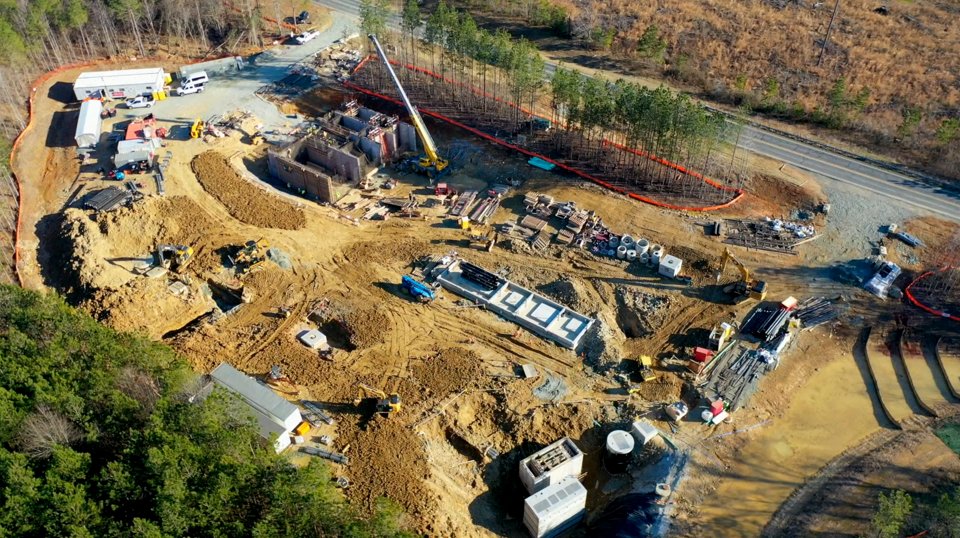 Chatham Park’s innovative wastewater reclamation system is, according to its designer, a “marriage of nature and technology.” 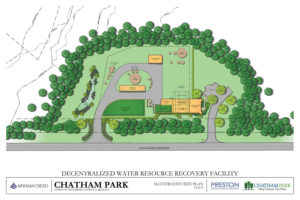 The Chatham Park Decentralized Wastewater Reclamation Facility is currently under construction on Eubanks Road and Business 64 in Pittsboro. The facility is nearly unique, one of a few of its kind in the country. The plant will use eco-engineering processes to clean Pittsboro’s wastewater and convert it into non-potable water that can be used in agricultural, industrial and landscaping applications.

According to the Clean Water Action and Clean Water Fund, “traditional” wastewater systems circumvent natural patterns, sacrificing resiliency and efficiency for speed and size — whereas decentralized wastewater treatment disperses the resource closer to its source and minimizes surface discharges. The latter, according to the organization, is “a way to ‘get back to nature’ while using 21st century technologies and management.”

The first system of the kind similar to the Chatham Park’s facility is at Emory University in Atlanta, and was designed by Tim Baldwin. Baldwin is vice president of McKim & Creed, a Raleigh-based company specializing in engineering, and is also the engineer for the plant in Pittsboro.

“In keeping with its focus on reuse and sustainability, Chatham Park chose to build a plant that incorporates beneficial reuse-quality effluent and is part of North Village’s water supply sustainability system,” said Marianna Boucher, the corporate communications manager for McKim & Creed. “Chatham Park leaders visited a similar facility in Georgia and were impressed with the technology and the results.”

Wastewater from Chatham Park’s North Village will go to the reclamation plant to be processed using organisms that consume nutrients such as nitrogen and phosphorus that are present in wastewater during the biological nutrient removal process. Baldwin described the five-stage process like a bug house which includes habitats that the organisms thrive in. At each stage, different organisms consume organic contaminants, converting them into biological cells, non-biodegradable organic byproducts and carbon dioxide. The finished plant will also include a greenhouse which helps complete the nitrification process.

Reclaimed water can be cleaned to one of two levels. Tier one, the most common, is used in industrial applications like 3M, located south of Pittsboro, which uses reclaimed wastewater from the Pittsboro Wastewater Treatment Plant in its production. The wastewater at the Chatham Park plant will be cleaned to a tier two level, the most stringent in terms of wastewater reclamation, allowing it to be used for food crops and irrigation.

“We believe our water will be able to be used for any permitted use in the future,” Baldwin said. 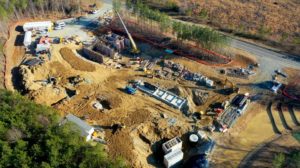 The plant is also designed to be doing more nutrient removal then the typical reclamation plant. Baldwin noted this was an important aspect of the design, as the current Pittsboro wastewater plant was going to have to upgrade to keep its permit in light of Chatham Park. The water reclamation plant is part of a larger wastewater needs program which includes a force main line to Sanford’s Big Buffalo Wastewater Treatment plant.

The town’s small wastewater treatment plant is nearing its capacity if all projects with allocations were to request permits, according to statements made by the town’s engineer, Elizabeth Goodson, during a regular board meeting in March. The plant is hoping to be online this fall and will begin to treat wastewater to ease the town’s overburdened system as the force main is constructed.

SOURCE OF ARTICLE ABOUT WWTP UPGADE TO ADD BIOLOGICAL TREATMENT