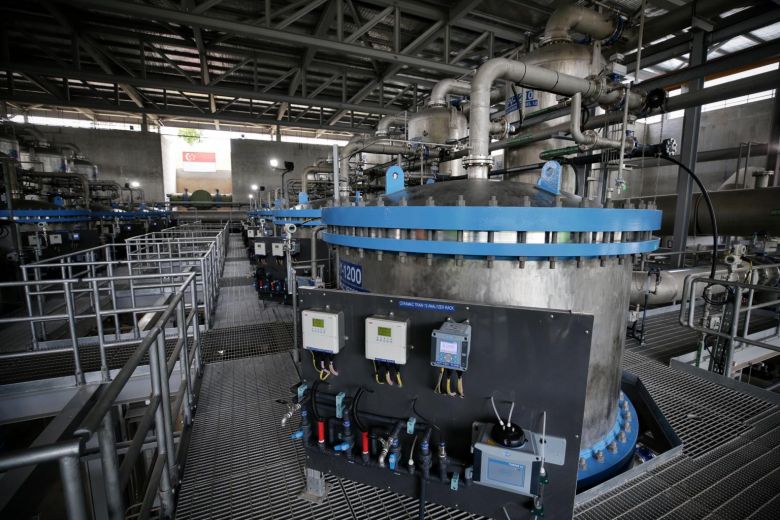 The awards recognise the most important achievements in the international water industry, including improved operating performance, innovative technology adoption and sustainable financial models.

The other projects in the running for the Water Project of the Year category were Montevina Water Treatment Plant Upgrade in the United States, Putatan 2 Drinking Water Plant in the Philippines, and the Tai Po Water Treatment Works Expansion in Hong Kong.

The award is the PUB's third consecutive win at the prestigious annual Global Water Awards, established by publisher and events organiser Global Water Intelligence since 2006.

Built in two phases in 1975 and 1981, Choa Chu Kang Waterworks is one of Singapore's oldest water treatment plants.

Despite its age, the plant houses the largest ceramic membrane system in the world, following an extensive three-year upgrade that started in 2016 and cost $162 million.

As part of the upgrade, ozone-biological activated carbon filters were also added to the water treatment process. This additional step helps to destroy microbes and remove organic matter from the water.

The plant has a total capacity of up to 80 million gallons per day, enough to fill about 145 Olympic-sized swimming pools.

It treats water from Kranji, Pandan and Tengeh reservoirs before it is delivered to taps in homes, businesses and industries.

Mr Ng Joo Hee, PUB's chief executive, said: "Our challenge in Singapore is to treat economically, to drinking water standards, the run-off in what we believe is the most urbanised catchment in the world.

"The deployment of ceramic membranes in Choa Chu Kang Waterworks, at scale and currently the largest in the world, makes this almost a breeze.

"We are happy to have helped push the envelope in water treatment and are most grateful for the recognition."

Global Water Intelligence publisher Christopher Gasson said: "I would like to congratulate Singapore's Choa Chu Kang Waterworks for ushering in a new era for water treatment as the largest ceramic membrane treatment facility in the world.

"This is testament to Singapore's unrelenting efforts for greater resource optimisation in its small island-state, and PUB's continuous R&D efforts to optimise both the physical and environmental footprint of its facilities in the most cost-efficient manner."