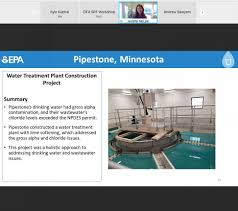 The city of Pipestone has received an Aquarius Award through the U.S. Environmental Protection Agency’s (EPA) Drinking Water State Revolving Fund (DWSRF) program for the financing and construction of its new water treatment plant.

The award was presented, along with others for projects around the country, during a virtual ceremony on Monday, Dec. 14. Jennifer McLain, director of the EPA’s office of ground water and drinking water, said during the ceremony that the city received the award for “excellence in problem solving” for using the DWSRF fund to “holistically address drinking water and wastewater concerns.”
The $15.4 million project was completed last year using a DWSRF loan of $8.4 million and a point source implementation grant of $7 million from the state to centrally soften the drinking water and remove natural radiation that exceeded federal standards. With the new water treatment plant, the city has reduced gross alpha emitters to below detection levels. Reducing the hardness of water leaving the plant eliminated the need for residents to have water softeners in their homes, which contribute to chloride concentrations at the city’s wastewater plant. Reducing the chloride concentration protects the surface and groundwater downstream from the wastewater facility.
“It’s a great example of how the Drinking Water State Revolving Fund can be a creative solution,” McLain said. “Congratulations to Pipestone and the Minnesota Drinking Water State Revolving Fund program for this recognition.”
The project was one of the first in Minnesota to deal with a wastewater issue by treating the drinking water supply, according to a statement released by the Minnesota Department of Health (MDH) prior to the ceremony.
“By taking a holistic approach to solving their problem, the city was able to meet both their public health and environmental standards far more cost effectively,” said Chad Kolstad of the MDH DWSRF program, in the statement.
Mayor Myron Koets said by video during the ceremony that the city realized it had a problem with both the incoming and outgoing water.
“We also knew, even with all the great financing that we got and grants, that it was going to put a financial burden on our citizens and so we weighed all those things very carefully and decided to go ahead with this project, knowing that in a 20-year time frame, looking forward, this would be the right decision for the city,” Koets said.
City Administrator Jeff Jones said by video during the ceremony that the city has heard positive feedback from residents and businesses about the water quality and the fact that people don’t need to use water softeners since the new treatment plant was completed.
In a statement released prior to the ceremony, Jones said the city was “extremely proud to receive this award, which recognizes the unique funding method used to make our new water treatment facility a reality.”
“Thanks to the Minnesota Department of Health, the EPA, Minnesota Public Facilities Authority and the citizens of Pipestone, the city now has a facility that has reduced the chloride concentration and the gross alpha levels in our water supply. The city appreciates this recognition of a project that was a culmination of many years of planning.”
In addition to the new water treatment plant, the project included the installation of water mains and new wells.
The DWSRF Aquarius program nationally recognizes DWSRF-funded projects for exceptional focus on five main areas including excellence in financing, excellence in system partnerships, excellence in community engagement, excellence in environmental and public health protection, and excellence in problem solving.
The city and Bolton and Menk, which designed the treatment plant, previously received an award for the plant from the American Council of Engineering Companies.